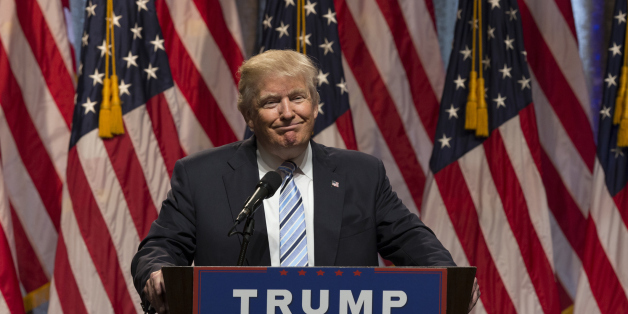 ‘Making America Great Again’ Needs To Start With A Cold, Hard Look In The Mirror

Legatum Prosperity Index placed the US in 17th place, pulled down by high levels of gun violence and poor access to quality public services.

The post-mortem of Donald Trump’s surprise victory in the US elections has focused on how the winner’s incendiary campaign rhetoric galvanised people eager for change.

But aside from the generalised kickback against ‘globalisation’ expressed at the ballot box, the key question remains: What is gnawing away at US prosperity?

Deindustrialisation will certainly be a factor. But this problem is hardly unique to the US. What is really at play here is the increasing breakdown of the American social contract - the death of the American Dream. Far from being the fault of migrants or trade competition, it comes down to how the US government chooses to support the life chances of its people.

One long-observed symptom is the stagnation in American wages for the vast bulk of workers. Pew research has shown how the US middle class has shrunk in relative terms since the 1970s as the share of adults in the highest and lowest income tiers has risen. The top 1%, moreover, now owns at least 33% of all US wealth.

The concentration of capital at the top of the income scale has been deliberate policy of successive US administrations through the tax system. Indeed, America has one of the lowest tax takes as a proportion of GDP in the entire OECD at just 24%. Only Chile and Mexico collect less.

Many Americans cling to a vision of themselves as freedom-loving frontiersmen unconstrained by government ‘oppression’. But on the ground, it’s making obtaining the basics - healthcare, education, social security - far harder for average earners.

This has had an enormous impact on federal and state spending power. It means US households have to pick up the tab themselves in areas which in other countries are provided, in whole or part, by the state.
Of course the notion of self-reliance is deeply ingrained in the American psyche. Many Americans cling to a vision of themselves as freedom-loving frontiersmen unconstrained by government ‘oppression’. But on the ground, it’s making obtaining the basics - healthcare, education, social security - far harder for average earners.

Take education. College graduates now start their working lives with an average of $37,000 in student loan debt, with grads in their 20s repaying an average of $351 per month. But the value of that education is increasingly questioned. Just 16% of Americans think that a four-year degree prepares students very well for a high-paying job in today’s economy. Even among graduates themselves, around a third think they don’t have the right skills to get better-paying jobs.

But these are the lucky ones. Around 17% of young people aged 16-29 in the US are classed as NEET (not in education, employment or training), lacking the skills to get any job and often staying that way. More and more young men are stuck in their parents’ home, playing video games with no real possibility of ever getting a job or marrying. It’s a worrying social trend storing up huge problems for the future.

Healthcare costs, too, have spiralled in recent years. But while ‘Obamacare’ has been blamed for a rise in insurance premiums, the real problem for households lies in the increasingly high bar at which insurance cover kicks in. So-called ‘deductibles’ - effectively the ‘excess’ - average $1,318, up from $584 a decade ago. It’s no wonder 42% of Americans say they find it difficult to afford healthcare.

In fact, despite having by far the highest overall spend in the OECD, the US health system is extremely inefficient. Prescription drug costs are double those in the UK, while a heart bypass costs five times more than in the Netherlands. Americans have lower life expectancy and higher rates of chronic illness than most other rich nations.

But it’s in the area of maternal health where we see the most tragic repercussions. Recent research found that there were 28 maternal deaths per 100,000 births in the US, more than triple Canada’s rate. In fact, US deaths in childbirth and shortly after have increased by more than 50% since 1990 - the only wealthy country that has seen such a rise.

In the workplace, Americans have to put up with some of the least generous leave entitlements in the world, with no statutory holiday pay and some of the lowest maternity leave allowances anywhere. And Americans that lose their jobs face strict entitlement eligibility for unemployment insurance (UI), meaning around 70% don’t qualify. State-mandated unemployment benefits can run for as little as 14 weeks and once the payment period ends most people are left high and dry.

All of these factors add up to a huge amount of stress on individuals and families and a drag on prosperity. The recently published Legatum Prosperity Index placed the US in 17th place, pulled down by high levels of gun violence and poor access to quality public services.

In fact, much of what’s wrong with America is internal to it, and not just a matter of migrants, trade agreements and globalisation. They’re all issues the US government has the power to change if it wanted to. Far from turning the US into a ‘socialist country’, in most cases it would simply be re-prioritising spending in line with international norms to achieve greater wellbeing for ordinary citizens.

But here again, the prognosis looks bleak. Analysis by the Tax Foundation has shown that Donald Trump’s tax plans could reduce federal revenue by $9.5trn over a decade, without accounting for a possible trade war that would hammer growth.

Lashing out at the global order may have played well to the crowds on the campaign trail. But in reality, Trump and his advisors need to look a lot closer to home and come up with some more innovative social and economic policies to start restoring the prosperity of American families and individuals.