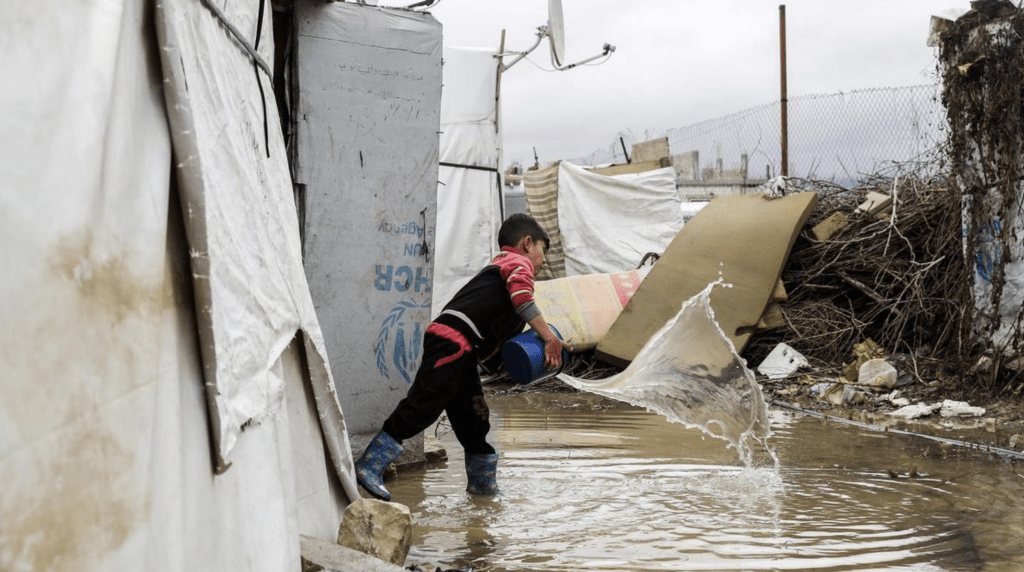 How Lebanon is teaching refugees to thrive, not just survive, and transforming public perceptions in the process

A Syrian child uses a bucket to bale out water from his tent at a refugee camp on the outskirts of the town of Zahle in Lebanon's Bekaa Valley. Joseph Eid / AFP

The work done by projects like Maps and the Relief Centre is essential to stop the perception of refugees as “others” outside the bounds of conventional society and a burden on it, writes Henrietta Moore

The suspected use of chemical weapons against civilians in Douma and the subsequent western military response has put the international spotlight firmly back on the horrors of the Syrian conflict.

The war, now in its eighth year, has left an estimated 500,000 dead and displaced nearly 13 million people – about six in 10 of Syria’s pre-conflict population. No nation in recent decades has had such a large percentage of its population displaced.

While the western media narrative has focused on the arrival of refugees in Europe, more than 85 per cent of displaced Syrians who have fled abroad have gone to neighbouring countries in the Middle East and North Africa, principally Turkey (3.6 million), Lebanon (1m), Jordan (660,000) and Iraq (250,000), according to data from the United Nations High Commissioner for Refugees (UNHCR).

As a region, the Middle East has unfortunately become accustomed to hosting refugee populations, most notably the Palestinians displaced by the 1948 and 1967 conflicts. Even today, at least 1.5m out of 5m Palestinian refugees and their descendants live in refugee camps, often in squalid conditions. While their rights vary depending on their country of residence, most of these “established” refugee communities struggle with similar problems: overcrowding in substandard accommodation, high unemployment rates, poor access to health and education and lack of sanitation.

That so many people are thrown a lifeline in their time of need is of course admirable in many respects. But the fact that such a high proportion of them have remained in limbo ever since, struggling on the margins of their adopted countries, should make us reflect. Quite apart from the geopolitical context, there has been a failure on the part of the international community to empathise with this plight or to do anything meaningful to alleviate it.

Seen in this context, the Syrian refugee exodus has heaped further pressure on an already volatile scenario.

Perhaps more than any other, the country which best encapsulates the complexity of the problem is Lebanon. After accepting hundreds of thousands of Palestinian refugees, it was devastated by its own civil war and then occupied by Syrian troops for nearly 30 years. Then, when Syria itself imploded, it accepted a further million refugees from that disaster zone. Today, one in four of Lebanon’s 6 million-strong population is a refugee, by far the highest proportion in the world.

Syrians in Lebanon face a bleak existence. More than three-quarters live below the official poverty line and 60 per cent are in extreme poverty, surviving on less than $3 per day. At the same time, the strain placed on an already fragile economy and society has been immense. Many Lebanese feel that international aid has been funnelled solely towards refugees, without recognising the wider impact on Lebanese citizens. Tensions are high and last year Lebanon’s Prime Minister, Saad Hariri, complained that the country was at “breaking point” after being turned into “[one] big refugee camp”.

While incidents of outright violence have so far been rare, many Syrian refugees complain about a growing resentment directed towards them. But with about 75 per cent of Syrians lacking legal residency in Lebanon, they face extreme difficulties finding employment or accessing education, among a host of other problems. Effectively, they are trapped in a legal halfway house that deprives them of the tools they need to forge a normal life and contribute economically and socially to their new country.